When most men have an orgasm they experience a refractory period averaging from 15 minutes to 1 day. During the refractory period, they can’t establish an erection and have little desire for sex. Most women, however, are capable of enjoying multiple orgasms while making love to their husbands. When a woman has an orgasm, her level of arousal drops slightly afterward, but can quickly rebound if she’s continually being stimulated.

Before we go into detail about learning how to have multiple orgasms, there are a few things you need to understand about the male body to be successful at achieving multiple orgasms. 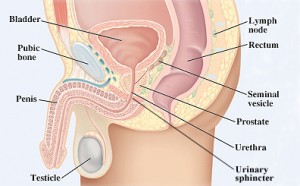 Point Of No Return

Every man knows that feeling of the point of no return right before orgasm. During this time his prostate is mixing the prostate and semen in preparation for ejaculation.

During ejaculation the penile muscles from his anus to his prostate contract in a pulsing rhythm and shoots his semen out through his urethra to pollinate his wife’s flower.

Technique For Having Multiple Orgasms

The prostate acts like a door for his semen and controls its flow. A big reason for his orgasm is for procreation, and if his semen isn’t released during an orgasm his body allows more “chances” for procreation to happen (multiple orgasms).

How to do the Prostate Squeeze Technique

If it doesn’t work the first time, don’t get discouraged. Go back to doing more kegels, and try again later. A strong prostate and the will to squeeze during an orgasm takes practice. Half of the fun is trying, right? 😉

Do you have any tips for men achieving multiple orgasms? Share them in the comments below. Don’t be shy. We’d love to read them.

Kegel Exercises for Him

Kegel Exercises for Her